MY INTERVIEW TONIGHT IS WITH BERNARD CORNWELL. 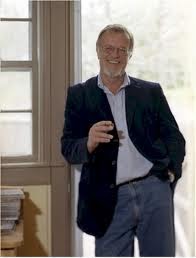 My interview tonight is with one of the world’s bestselling authors and a personal hero of mine. His Sharpe series, based on the Napoleonic Wars, became a tremendous success when transferred to television and his ability to combine wonderful fictional narrative with well-researched historical events makes each of his books a delight to read. His main characters whether Sharpe, Uhtred, Arthur Pendragon or Starbuck are all legends, or well on the way to becoming so, and after well over thirty books he continues to enthral his readers.

It’s a great pleasure tonight for me to talk to Bernard Cornwell.

Bernard, your books cover a wide range of time periods from prehistory with Stonehenge to the Sharpe series set in the 19th century. Is there a new century you would still like to explore?

There is, and I’m hoping to explore it this winter – a new series set in the late 16th and early 17th Centuries.

The late Tudor and Jacobean period? I'm presuming we're talking about England. Going back to your start as an author, the story has it that you got your first novel published by thrusting it in the hands of a publisher while watching a parade. A great way of evading the famous Slush Pile if it’s true! Is that what happened?

That’s not quite what happened. I was at a party watching New York’s Thanksgiving Day parade when a laconic English voice said ‘they do this sort of thing frightfully well’. He was a literary agent and I persuaded him (with difficulty) to read the novel I’d just finished, and for which I was having difficulty finding a publisher. Within a week I had a seven-book contract. He’s still my agent thirty something years later!

The Sharpe books were your first published novels. What made you choose the Napoleonic Wars as your debut on the writing stage?

You write what you want to read!  I was (still am)  a huge fan of the Hornblower series and it struck me as odd that so many writers were dealing with the naval side of the Napoleonic wars and none was writing about the land campaigns. It seemed to me to be a gap on the shelf!

I know you must have been asked a thousand times about Sharpe, but two quick questions. Asides from the time when Sharpe is in Portugal most of the series has been filmed for TV, but are there any plans to film Sharpe’s Devil?

The other question on Sharpe, of course, is will he feature in any future books?

Probably. I don’t know when, but I’ve kept back one splendid battle for a novel and one day I’ll get round to writing it!

It’s a great shame, but there can never be any further Arthurian Warlord books, for obvious reasons. The series has a special place for me and I find something new in its magic every time I reread it, but do you have a favourite Cornwell book, or series?

The Arthur trilogy is my favourite!  They were fantastically exciting to write, which is why I like them so much. But I have a lot of other favourites – I like Gallow’s Thief and The Fort, and for some reason Sharpe’s Siege.  But my favourite Sharpe book?  Trafalgar.

All of your books are historically very accurate from the point of view of geography and main events. How much time do you spend researching each novel, certainly at the beginning of each series?

It’s really an impossible question to answer, sorry! Research is a lifetime activity. I became fascinated by the Napoleonic period when I was a teenager and began to read widely back then, similarly I became incredibly interested in the Anglo-Saxons when I was at university, so between that period and actually writing Uhtred is a gap of what? Thirty, forty years?  And I was reading about the Saxons all that time, and all that reading is fed into the research.

At the moment you bring out at least one book a year, you also act of course and you travel a lot. Do you have a strict annual routine you try to keep to?

I write between October and April!  And generally I refuse any invitation to travel in that period. From June to August I’m caught up in the Monomoy Theatre in Chatham on Cape Cod where, for my sins, I’m a member of the company. That leaves May, September and October! Not a bad life!

Very few internationally successful authors are as open as you on social networks, especially Facebook. Few also take the time to reply on their websites to fans’ queries and comments. Is keeping in touch with your fan base important to you?

I should imagine it’s important to any author!  You get a lot of ideas from readers!

You now live on Cape Cod, one of the most beautiful parts of the world and I love going whale-watching in Provincetown. Did you and Judy move there to write, or move there because you could because of your writing?

Because we could, because it’s a beautiful part of the world, because the sailing is good here! We actually split our time between Cape Cod (summer) and Charleston, South Carolina (winter). We own a house in the historic district of Charleston which is, of course, sensationally beautiful, and it’s in Charleston that I do most of the writing.

As part Canadian, born and brought up in the UK and living in America, do you now consider the United States as your “home” country?

I’ve lived in the US for half my life!  Yes, I consider it home, because it is, but I still think of myself as English and, of course, retain a huge loyalty and affection for Britain. But I married into the US, and there’s not much you can do when you fall in love except go with the flow, and as we seem to be very happily married and because Judy has family here, it’s just more convenient to live here. And I like it! Who wouldn’t like living in Cape Cod and Charleston?

You’ve done more than most writers could ever aspire to, but do you have one ambition you would still like to achieve?

To write a better book?  For a long time my ambition was to sail the Atlantic in a small boat, but I did that with two friends a few years ago. I’d like to play Prospero some time, and who knows? It might happen . . . .
Posted by Richard Hardie at 20:47