The Temporal Detective Agency's first case since relocating to the 21st century from Camelot involves the theft of the world's biggest diamond, the disappearance of Lord Nelson's statue from the centre of London, and a battle against a gang of ship wreckers and smugglers based in the year 1734. With the help of Sir Galahad, the Agency faces death and defeat in their first real case when they meet the evil Black Knight and the cliff where he kills his enemies... by throwing them over a cliff called the Leap of Faith.

By the end of May it will also be available on Barnes & Noble and Gardiners.

What was the first thing you had published?
Leap of Faith is my first book published on the worldwide stage, though it did have a predecessor called A Leap of Faith that was published by a small company in New Zealand. Unfortunately, it was only available on their own website so it had very little market visibility. I have to thank Caleb Mason, CEO of Publerati Publishing in America for believing in me and taking a chance on a relative unknown.

Tell us about your proudest writing achievement.
I was an Assistant Leader in the Scout Association for 15 years and for the last 10 was very much involved with the Scout & Guide Gang Shows. I co-wrote the 2000 Millennium show and then wrote and produced the one in 2002. Writing a show for 80 people on stage and another 80 people behind scenes and front of stage was a wonderful experience.

I also managed to get Terry Pratchett to agree to be filmed being kidnapped by the cast from Ottakar’s bookshop in Salisbury. He co-wrote the scene with me and we showed it as part of the story every night. I think co-writing with Terry and having such a phenomenal success in 2002 is my proudest writing moment. Incidentally, Terry remains a friend and he appears by name in book two of the Temporal Detective Agency, which is called Trouble with Swords.
My greatest thrill has yet to come, I hope, when the Temporal Detective Agency series becomes a best-seller!

What are your writing strengths and weaknesses?
Like many authors I occasionally go off on a tangent, and need to do ruthless editing to bring the story back on track. An agent friend of mine, Sarah Manson, advised and nurtured my meagre talent (?) but the one piece of advice I’ll also hold dear is her instruction to have a piece of paper above my PC with the letters GOWTS on it. It stands for Get On With The Story and is the best advice I ever had. Other than that I give thanks for spelling checkers and for people like Sarah who help people with no expectation of a return!

Do you have a writing routine or any odd writing quirks?
When I first started writing I worked for a computer company and ran their AsiaPac sales operation. That meant (luckily) lots of Business Class flights and plenty of time to relax and write. Now I mostly work in the UK and frequently from home, so tend to take an hour at lunch time mostly to do editing. In the evening I find I’m at my most creative and will usually spend a couple of hours. Maybe more at the weekend.

Is there a special place you like to write?
I have a large study at home, equipped with chair, settee, TV, business phone, fax, stereo and coffee. More often than not, it’s also equipped with a cocker spaniel called Benji, who is threatening to be in book three of the series!

How important is it to you to plot your novels?
I love writing for Young Adults, or to put it another way, anyone from the age of 12 to 80. The plot is everything and knowing the route of the novel is critical. That comes back to GOWTS! I have to admit sometimes I don’t know what is going to happen next, though I find the characters always know. I always know the main plotline and how the story is going to end and why. The “why” of course is most important, both for me and the reader.

Are your characters ever based on people you know?
Terry Pratchett is a name only in my second book, but other than actual characters from history that feature in all my books, I may occasionally use the personalities of people I’ve met, but never their names. In fact Tertia’s character was very much based on someone I know.

How much of you is there in the characters you write about?
There’s nothing of me in any of my characters, either by characteristic, or name. I’m not interesting enough.

Who is your favourite author and why?
I have two favourites. Terry Pratchett has been a consistent favourite of mine and I re-read his books like old friends. His high standard has never dropped and each new book is a joy, full of humour and pathos. He found a treasure-trove in Discworld that hopefully will never end. I also love Bernard Cornwell. I’ve read all the Sharpe novels, but have to admit his Saxon series and the King Arthur books are wonderful. They’re so realistic and well researched.

What qualities do you think writers should have?
Always write for the reader, not for themselves. Persistency... rejections come all too frequently, so remain positive and remember that all the agents who wrote those rejection slips will be kicking themselves one day! Above all, always take advice and act on it if it’s good. Read out loud what you write and if it doesn’t sound perfect, then it isn’t.

What are you working on at the moment?
I’m editing the sequel to Leap of Faith in the Temporal Detective Agency series. It’s called Trouble with Swords and takes the characters on an adventure trip to Camelot, ancient Rome and Egypt. We’re hoping to release it in August or September this year. I’m also part way through the third book in the series, with a working title of the Big Bang Theory. Book four’s plot is already mapped out.

Further down the line Marit Meredith and I are going to be working on a rather special celebrity chef recipe book, but more of that nearer the time. Those who read Leap of Faith will understand!

What advice would you give to an aspiring novelist?
Terry Pratchett gave me an excellent piece of advice when I told him I wanted to write a book. He told me to keep the day job. I have, but I still hope that one day I’ll be able to support my family by writing about the Temporal detective Agency.

Having said that, keep trying. A good author thrives on rejection. I did, and so did someone called J K Rowling! 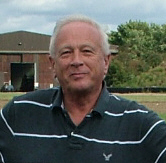 Richard Hardie lives near Southampton, is married with two grown-up kids and a cocker spaniel. He has mostly worked in IT sales and still does while he achieves his ambition of becoming an independent writer. He has been a leader in the Scout Association for more than 15 years, which has given him great insight into the humour and story likes of children. He has written five stage shows called “Gang Shows” for the Scout Association, which have been performed as far afield as New Zealand. Richard second book,

Trouble with Swords will be out in the autumn.
Posted by Richard Hardie at 14:15