What's it all about and how did it start? (part one)
Good question!
One dark and stormy knight! ....once upon a time Merlin had fifteen apprentices (all girls) and all given names she made up because at her ripe old age of 30 her memory wasn't what it was. As a result there was Unita (one), Douvet (two), Tertia (three), Quattra (four) etc....up to Quindecatta (fifteen). But that was far too many  to build into the story of the Temporal Detective Agency, so it quickly became Unita, Douvet and Terta. Though even Douvet melted into the background, even though I suspect she may make an appearance later in the series.
To me Merlin was always a woman (for reasons I may go into one day!) and was madly in love with Arthur, the King of the Britons. She also had a younger sister called Marlene who was frumpy, dumpy and had an amazing shock of orange / red hair. With Arthur eventually realising Merlin is the woman of his dreams and the two of them disappearing to the island of Avalon for a honeymoon the opportunity was there for Unita, Tertia and Marlene to start the Temporal Detective Agency and base it in Merlin's old cave. Rather than operate from Camelot in the 5th century they used Merlin's Time Portal to set up the center of their operation in the 21st century because the cases would be more interesting and thee toilet facilities infinitely better! They also took sir Galahad with them because he made darned good coffee and didn't charge much! 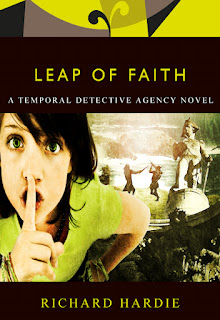 The Temporal Detective Agency was ready for its first major case!
Posted by Richard Hardie at 12:48